Of all the famous Japanese robots to have been produced as Jumbo Machinders, perhaps none were made in as many forms as Great Mazinger. Popy made at least 2 versions of the original toy and one was re-released by Unifive. Mattel released at least 3 versions as part of their famous Shogun Warrior line of toys, and both Nacoral and Famosa had 2 releases of their versions of the toy. But perhaps rarest and most sought after version might be this unique bootleg from Hong Kong.

This toy was based on the original Popy version, but the limbs are molded in white. In addition to the alternate color scheme, a number of significant changes have been made. The wheels on the feet have been removed and the chest "V" is now a much thinner piece of plastic. The head is now one piece of soft vinyl with no removable Brain Condor. The sculpt on this piece is not particularly bad, but the paint job is.

The rest of the toy is much cheaper as well. There are no weights on the legs so it is very light. The plastic is thin and squishy and you can actually see through it on the upper part of the forearms. The missiles are one piece of cheap polyethylene that completely lack the sharp detail of their two-piece Popy counterparts. Nothing is included that would actually fire these missiles and they cannot be used in a Popy accessory fist. The missile holders are molded right onto the legs and are rather poorly done, causing the missiles to point slightly upwards instead of being strictly horizontal like the original.

You can still store a sword on either leg, but only the right hand can hold one. The waist has a simplified gold foil sticker with "Great Mazinger" written in Japanese. Though it is written in Japanese, it is unique to this toy and it seems a little strange to me that a toy made in Hong Kong would still have Japanese writing on it, especially when they didn't just re-use the original sticker. There are supposed to be stickers on the knees and pelvis, but mine is missing these.

This is a particularly tough toy to find. I've only seen 3 or 4 of them in the 6 years or so I've been collecting. It is said to have been originally sold in a bag with a header card and that it is not the only toy like this to be made. Another version that can be confirmed is one with yellow limbs, and there may be others out there. Nothing would surprise me at this point..... 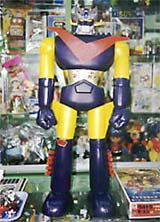