Space Hero is another "Junior Machinder" based off the body of Robo Kress, but featuring the head of Combattler V. In my opinion, the two do not combine well and the toy ends up being a rather ugly mishmash.

It stands about 14.5 inches tall and comes with a variety of weapons, including a sword, a sheild, a missile launcher in the waist and disc launcher just above that. These last two pieces of artillery are obscured by behind a removable belt and the opening chest compartment.

I'm not really even sure what the point of the chest piece is. It doesn't close all the way and seems prone to breakage, though mine is luckily still intact. Each door has a red piece that when closed is seems to be suggestive of Great Mazinger's chest V. In my opinion, this toy would look better if they did away with it entirely and just had one shooting mechanism in the waist. Less is more sometimes. Although to be honest, there are so many different variations of these toys it wouldn't surprise me if there is one out there like that.

You can store two missiles on either side of his belt and two more, along with 4 discs, on the hooks on the side of the legs. Both fists launch as well. This one came packaged in a box that really doesn't even show the toy inside. Instead, it has artwork showing the more common toy that features the head of Atoranger and the body of Jeeg.

Perhaps the only thing that makes this toy notable is that head. Until recently, it was believed to only be on Junior Machinders. But awhile back, a full sized Robot Factory style bootleg Jumbo turned up with this head on it. Maybe there are other Jumbos out there featuring parts previously only seen on Juniors. There's still so much to be discovered... 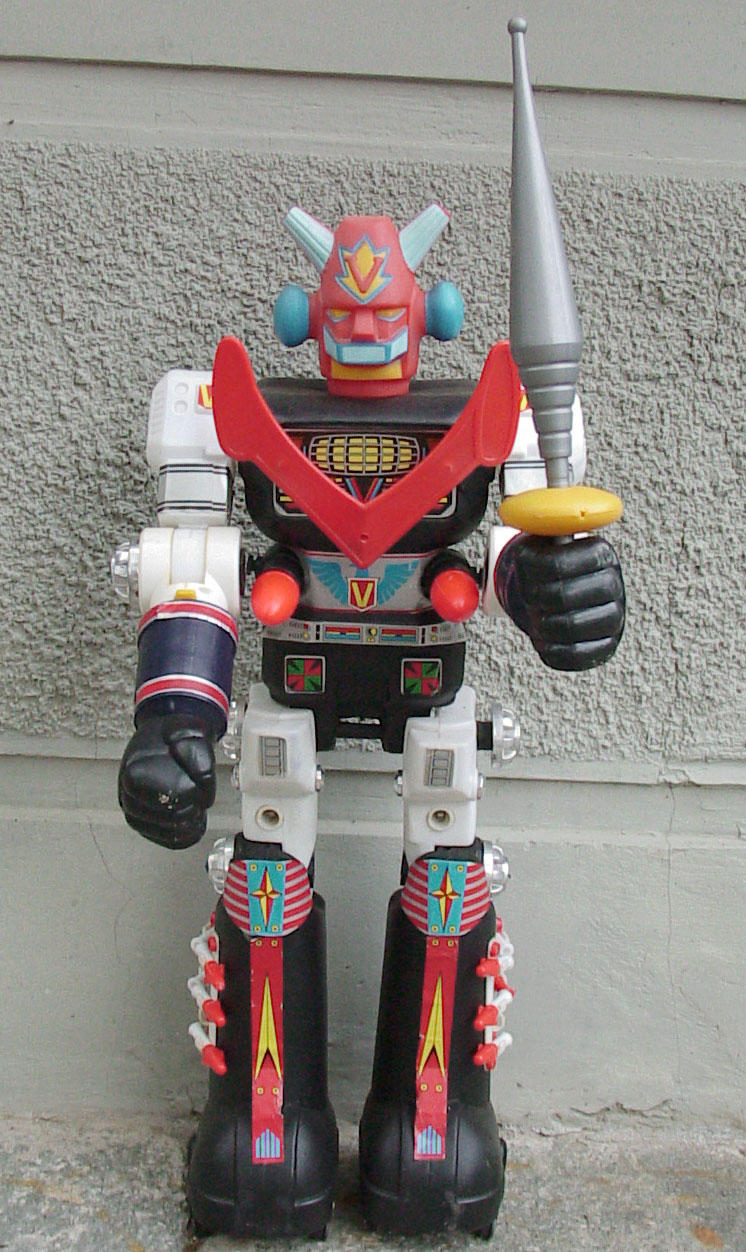 14 comments posted
I have this toy, but it came

I have this toy, but it came in a box labeled "Hanedaman: Space Warrior" with art on the box that does match the toy (sort of...he's actually fighting another robot, both of which have equal space on the box, and are both featured on the side of the box, so I assume this is a junior I don't have yet). I can provide a pic if you'd like.

Oh, and I'd disagree with you on the looks of the toy. I love these Italian junior machinders and pick them up whenever I can find them on E-bay. They're very kischy!

I don't see what you're trying to show, but I am familiar with Hanedaman. I've passed on buying one a bunch of times because it's so similar to this one I already had. Hanedaman is close, but actually comes with different legs. And I love these crazy Junior Machinders too, but this one just isn't one of my favorites.

I think I have to set permissions differently on user galleries so that they can be linked in like that. Will look into it tonight.

Huh, the pic showed up a while back and now it's gone. Not sure what happened there. You can find it in my gallery, though.

Yeah, Hanedaman does have navy blue legs. I also have the Space Hero junior, which looks exactly like the box, but I assume you have that. I really want to find that second robot that is on the Hanedaman box. No luck so far.

Also note that on the chest crest on the box, it looks much more Mazingerish than the toy. Plus, the toy came with an axe, where the box art shows him with a sword.

Here are the three Italian juniors I have gotten so far (some not quite assembled because I haven't broken the sealed bags):

Cool pic. Makes me want to pick up some more of these guys again. It's always an on again/off again sort of interest I have in them. I usually buy them if I see them cheap, but don't often go out of my way for them. The variations of these things are literally endless and I'm always a bit hesitant to make it a goal to acquire them all. I do have a few more that I haven't reviewed yet, including the other two you posted (though my "Robot From Outer Space" is missing just about everything) as well as a crazy Mazinger knockoff, a pretty decent Jeeg and a loose "Rocky Robot".

I hope I'm not being a pain about the juniors, but I would love to see any pics you might have of any you possess. I really love collecting them ,but it's pretty tough on E-bay given the ambiguous search terms. I just think they are so damned fun...

And damn, I want that Kimpoo Warrior.

Any way, if you have any more pics, feel free to send them to me privately, or here.

Well, honestly, it sort of is a pain in the butt, but I'll do it anyway.. ;) It's just that all the boxes are stored away who knows where and some of them are in my counter case which is a chore to dig into. But it should be fun. Give me a couple days or so..

Ok, no boxes present, but I uploaded a bunch of pics to my flickr page of all my junior, mini and carnival machinders. Basically, all my ugly robots. ;)

Wow...thanks! I've only gotten a hold of three of those things (and a Daitarn 3 semi-machinder). The problem I have on E-bay is that the search terms to find these juniors are very imprecise. The term "machinder" isn't often used and I don't know what the front of the boxes say. I'm left with terms like "space robot" or even just "robot" that turn up hundreds of listings I don't want. So, the quest goes on...

Thanks so much for putting in that work to help me out a bit. That's an impressive collection there. And if you ever want to get rid of that junior Danguard, let me know!

I don't typically seek these out specifically and just buy them if I see them at a price I like. But I agree, it would be tough to specifically target these as a hobby.

I can't believe that after all this time I still don't have that Daitarn Junior Machinder. It's pretty common and usually cheap so you'd think I'd have picked one up by now, but no. Even more amazing is that until now, I've never actually placed all those things together in one display. They are usually spread out of several cases in two different rooms. So it was actually nice to see them grouped like that. It sort of reminds me of why I buy individual pieces in a way. Thanks to you for asking me to do it. ;)