Creature From The Black Lagoon

So another slow day, so another silly review. Now I'm sure most of you will see this thing and either laugh or throw up in your mouth. And at one time, I was right there with you. This is another one that I used to make fun of my friend for buying when I was first being exposed to toy collecting. He'd be dropping about $20-25 each on various colorways of this toy and I thought he was dumb. Now they sell for about $50-75 and there's a bunch I need to get.

This is 13" tall, made in Mexico out of cheap blow molded polyethylene and has only two points of articulation (the shoulders). The body is a pretty close approximation of the Gill-Man, but the face seems to be based more on the design from The Creature Walks Among Us. Overall, the look is rather silly, but charming in a crude way.

They look particularly good when grouped together. 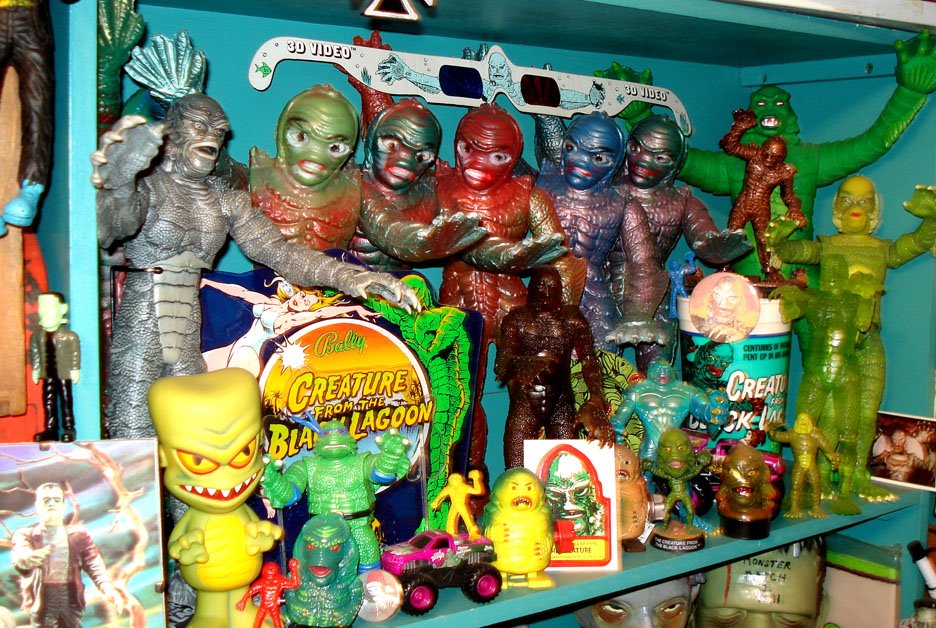 But believe me when I tell you, this is actually a pretty popular toy among monster and Creature collectors. It sort of makes sense, in a way. In general, it seems the average monster collectors is older than robot collectors and grew up on cheap toys. And Creature collectors will buy most anything related to the character. I'm not sure what my excuse is, though..

I'm not sure exactly how many different colorways were made of this toy and there is some disagreement about when it was made. Some think it was made in the 1960s, some think the '70s and some think they may still be cranking them out even today. They show up on Ebay fairly regularly. A couple of times a seller even listed ones with bags and header cards, but the general thinking was that the header was fake, just a photocopy from a Mexican lobby card. I can't confirm that one way or another. 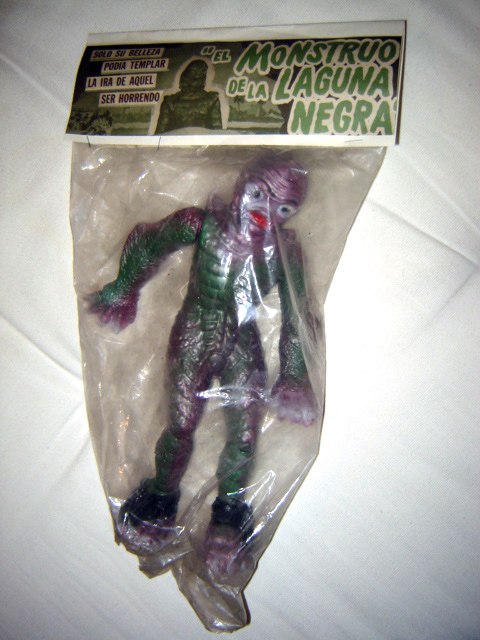 So, in conclusion, I certainly don't expect any of our readers to fall in love with this right away and run out to buy one. But maybe over time it's goofiness will grow on you like it did me. In the meantime, consider the point of this review to once again say simply...."this exists".

How awesome would this be if it was a glowie? Green with like purple and red highlights...

"I had a choice, buy a new car or buy a Jumbo Machinder Green Ghost C3...it really wasn't a hard choice to make."

Well, Jason, I think I'm pretty much bound by honor to buy ANYTHING glowie of the Gillman! I'm with ya!

Actually, now that you mention it, is there such a thing as glow in the dark polyethylene? I don't believe I've ever seen it.

I took Jason's comment to mean that if they rotocast this in GID vinyl, it would be killer. I've never heard of blow-molded GID polyethylene...but with the technology available to us, I'm sure we could come up with a glowie polyethylene fig... ;)