Another year, another Star War...With The Rise of Skywalker movie released, The Mandalorian Season 1 finished, and the Clone Wars cartoon on Disney+, We're gonna dive into some older toys because there's never enough STAR WAAAAAAAAAA-

The Disney store exclusive Star Wars: Elite Series die-cast action figure toy line has been met with both criticism and praise. Praise for their sculpted detailing and metal content, and criticism for their easily chipped paint, visible screw holes, and limited articulation. Through it's run, further criticism has been added in part due to Disney's way of selling the Pre-Disney a.k.a. Lucas-Era characters to customers (for example, Boba Fett). If you went to a store on each figure's designated drop date, chances are they would only have 8 figures to sell. Because of this, the figures would be raffled off to customers, who would THEN be allowed to buy them for $24.95 + tax. Though you could also obtain these figures via the online Disney shop, but only if they hadn't sold out yet. ¡Ay, caramba!

Today we will be looking at Episode 3's General Grievous, commander of the separatist droid army. Today's sample was provided by George Gaspar of Double G Toys (https://doublegtoys.storenvy.com/) and YouTube's The Toy Geeks Network (https://www.youtube.com/channel/UCSi5MEGzqpqPczsl_AtdCEg). This figure comes directly out of the the $300+ 2015 D23 Expo exclusive Star Wars Elite Series boxed set (edition of only 500 Worldwide) that George waited for a long time ago in a line far, far away from the checkout to regrettably purchase so that he didn't waste his trip in vain and return empty handed...Let's see if his time and money were well spent!

Okay so right off the bat let me say this, as a display piece, held up by a stand (I used a S.H. Figuarts Act.4 stand), it...works. This is not a toy you give to a kid, or even a Star Wars fan. This is a toy you may suggest to General Grevious fans with the warning that, unlike other figures in the elite line, this is MUCH more of a display piece than anything else. If you try to treat it like a toy, you will be left grievously disappointed. Heh. The single-boxed release of this toy that came later was packed with clear bladed lightsabers, included a magnetic stand to keep Grievous, well, standing, and a peg hole was also added to his bottom right foot to help add support. Spoilers: It didn't. The D-23 early-bird release seen here in our review didn't come with a stand.

"Back away, I will deal with this Jedi slime myself!

"You fool! I've been trained in your Jedi arts by Count Dooku. *coughs* Attack Kenobi...hehehehahaha." 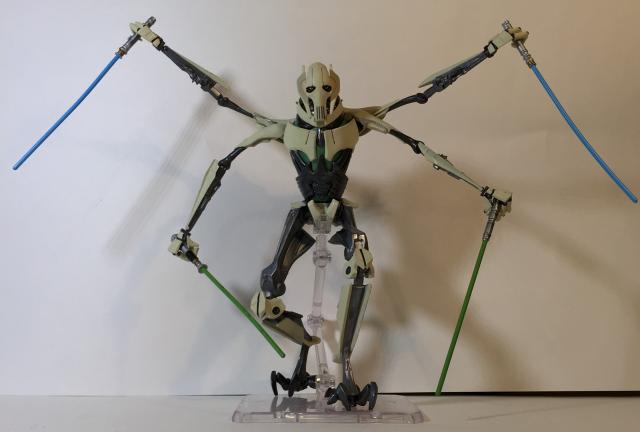 Nada. This figure came to me loose for this review.

As for the sculpt, the level of detailing is...passable. All the shapes are there, but they could've gone deeper and more intricate. Take for example the head sculpt:

The sculpt matches what I would expect from an early Hasbro black series Grievous after they stopped using Gentle Giant to make their figures, when they switched in-house sculptors churning out lesser detailed sculpts, and before they got into the current high detail sculpt & face-printing to compete with the overseas offerings from Bandai and Mafex. 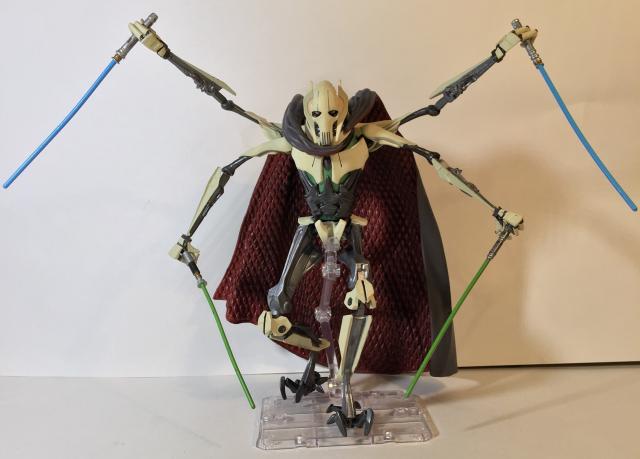 The detailing here is good but I know if other companies like Bandai or Kaiyodo make their own figure, there would be way more details, especially in places like the head, neck, and torso. General Grievous stands at 6.5" or 8.5" inches tall depending on how you have him posed. 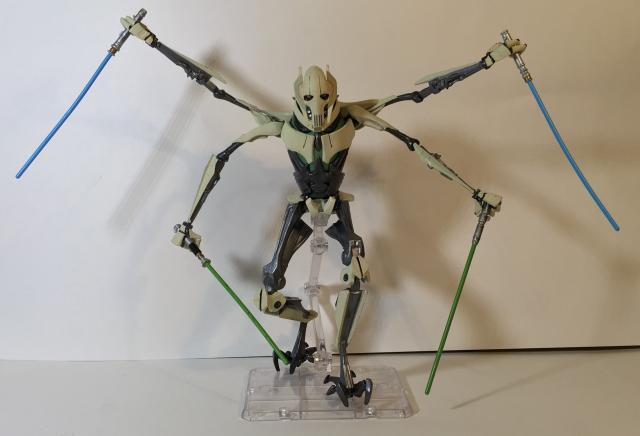 Here's some more close-up shots of the various parts of his body: 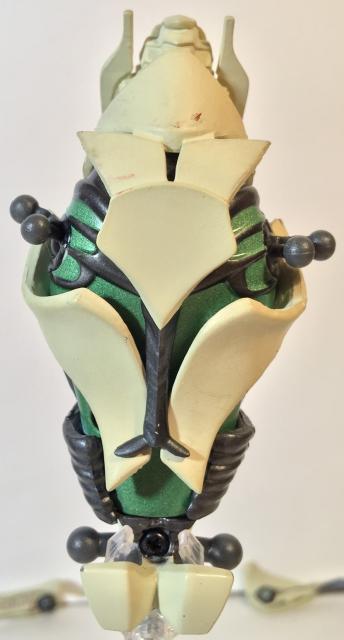 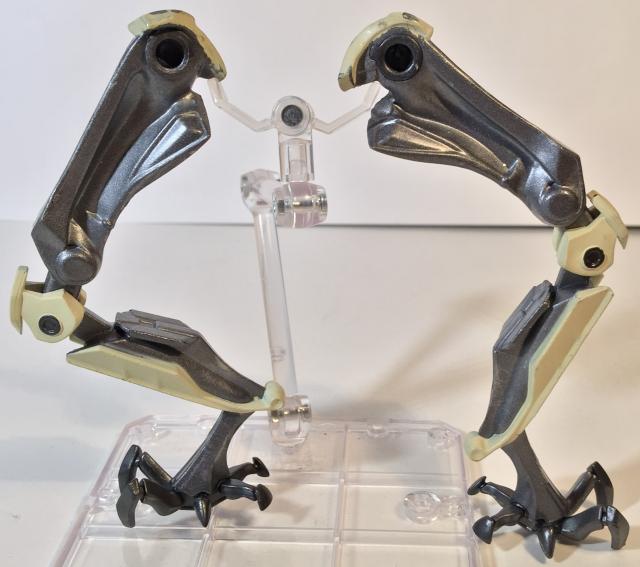 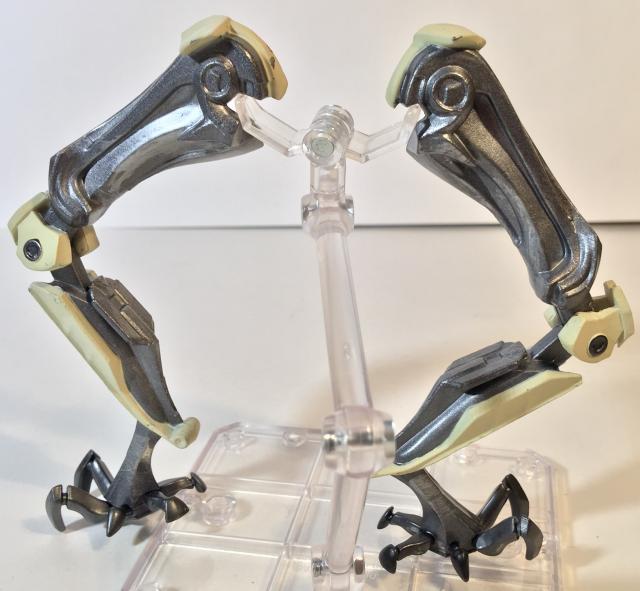 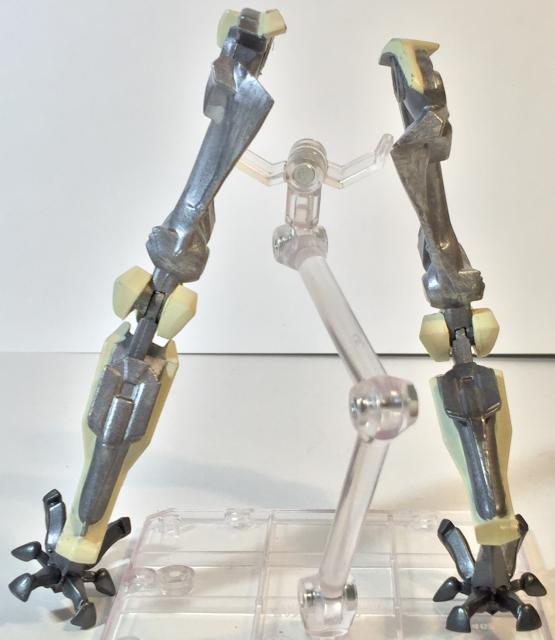 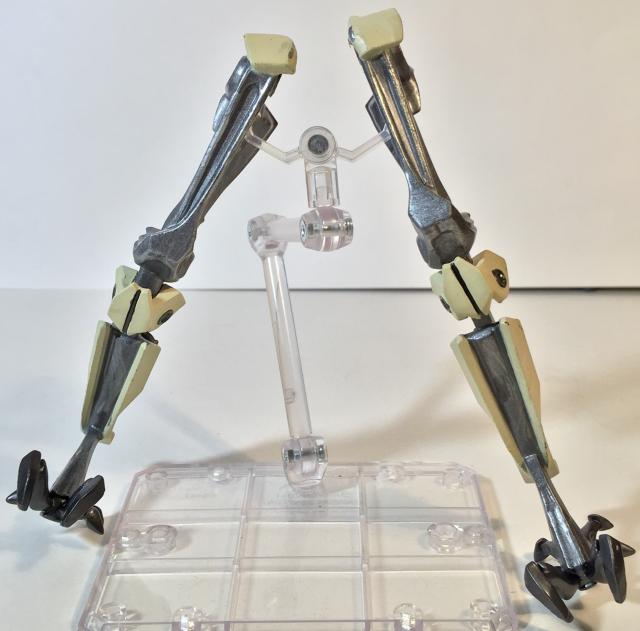 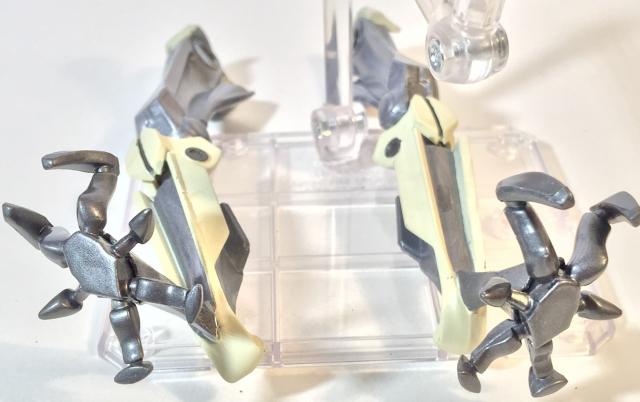 Articulation...yeah. It suffers greatly due to the die-cast, the character itself, and the style of joints used. The metal content is nice and appreciated for the heft, but for a character like this, it was poorly chosen. It makes him waaaaaaaaay too top heavy. They really needed to give this toy a stand or stronger/ratcheted joints. Because he just uses ball and socket joints for the shoulders, elbows, and hips, AND they made his forearms metal, he has super droopy arm syndrome and legs that can't hold him up. These parts also loooooovvvvve to fall apart at the slightest touch or wrong move. This figure is a lesson in frustration and a true test of one's patience. For both the arms and the legs, one will find themselves using Grievous's own body sculpt to hook his shoulder pads and hip pads in and around other armor plates just so they grab on or, well, really rest against (thanks to the forces of gravity) just to hold a pose or even stand up. It's that bad. You WILL need a stand to stand him up.

For the articulation count we've got: 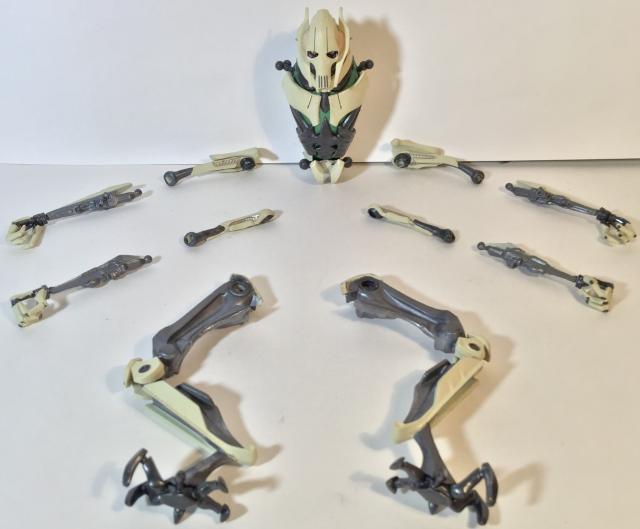 One beef I have with this figure is the hands! The hands are nicely sculpted, but they are so open in pose, that they do not hold the skinny light sabers he comes with well. I think only one hand actually manages to grasp one while all the others just slide through. To get him to hold all the sabers, look at my photos. Each saber fits best in one type of hand and at that, they must be twisted in so any bumps, buttons, or details that protrude from the saber's hilt are used in between Grievous's fingers so he can actually grip them. It's that involved just to get him to hold the damn things. Or maybe the light sabers are just too skinny themselves. Or maybe this is just a poorly made and thought out toy. Again, it works best as a display piece.

The sabers seem to be made from a hard plastic that is only flexible at the blade part because of how skinny it is. Don't force it! These sabers can only flex a little bit and should be handled with care. Since writing this review, it turns out that the sabers for the mass market release figure are translucent and not opaque as is the case with this D23 boxed set version.

The cape fits around his neck and actually serves as a quasi-stand to keep him from falling down. So that helps. The cape is a flexible PVC. It's heavy and can get it the way.

The paint overall is fairly clean, but there is some slop here and there. Heck, it seems about as clean as I'd expect an early Black Series figure would be. The paint over metal easily rubs and chips off. Again, treat this as a display piece.

God only knows what's on the back of the cape here: 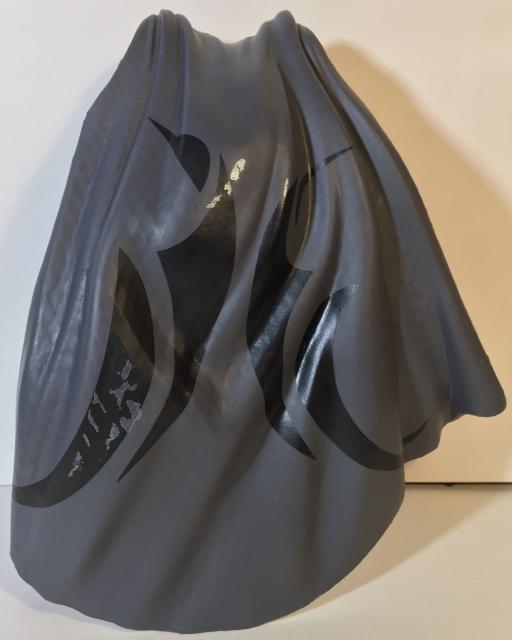 Here you can see the edges of his diecast butt-armor have some chipped off paint from where his legs rub against them. You can also see 2 of the screws that hold his diecast torso together in this photo: 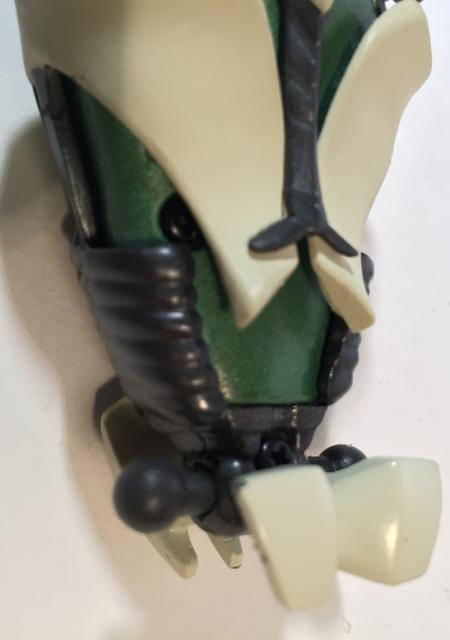 Here you can see the top edges of his diecast hips have some chipped off paint and the back of the neck collar and back armor have some red scuffs: 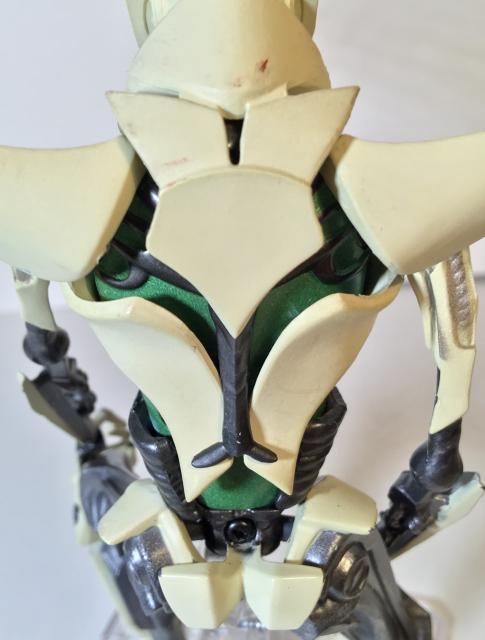 My only BIG complaint...is that they forgot to paint in between the darn finger joints on one of the hands! Bleh! This deal is getting worse all the time!

The plastics and PVC used seem sturdy and durable. Only the sabers felt flimsy, but that's also in part due to their skinniness.

The METAL! The metal will strike Grievous down with a vicious blow! Because it makes him oh-so top heavy. Grievous die-cast count is BIG and because of it, he weights OVER 1/2 a pound and that's WITHOUT his cape or sabers! General Grievous has metal in most of his torso, his neck, forearms, pelvis, hips, and his lower legs are also entirely metal. His torso armor, knees, and toes are PVC. Don't get me wrong, the "metal heft" we love feels good, but when used in such a top-heavy character like this, it's a big problem.

Overall, this toy has many issues that should have been caught and addressed during the design phase. It may have benefited from only having the legs, hips, and pelvis made of metal. Making the torso and forearms metal, especially with those ball and socket joints was a terrible choice. Had they been PVC and hard plastic, I think they would have fared better. The mass-market release of this Elite figure comes with a magnetic base so he can stand up much easier. This allows you to put him in poses that would be balance's worst enemy, but still manage to stand up because of the strong magnetic force. Disney clearly didn't "use the force" when designing this particular figure early on and because of it, I find their lack of faith in well thought out toys...disturbing. At least they did eventually include a base and made his light saber blades translucent. So that helps.

At $25 when it came out, it wasn't a bad deal even though it wasn't a great toy. It had many issues, but at the time it was the only game in town for a 6" range General Grievous before the Bandai Model Kit or the Hasbro Black Series figure came along. This toy was always hard to get, even when it came out, but Bandai's and Hasbro's superior offerings were readily available.

Today, it sells online for $45-50 Loose Used, and $60-90 New Sealed, which overall, I think is WAY too much for this toy. It's just NOT worth the money, nor the frustration it delivers. Again, it's best treated as a display piece than as an action figure. After handling the figure, I'd honestly pass on it, and this is coming from a General Grievous fan who owns almost all of the toys they made of him thus far. It's just not good or fun to own.

SHOULD YOU BUY IT?:

If you HAVE to own this General Grievous figure, buy the mass-market Disney Store version to get the included magnetic stand and translucent light saber blades. The stand will somewhat help it stay up and look good on a desk, shelf, in a diorama, or display case.

If you are looking for a superior 6" scaled General Grievous action figure, seriously pass on this and look elsewhere. Pretty much the Hasbro Black Series or the Bandai 1:12 Model Kit blow this outta the water all day every day. And I'm sure the convention-previewed Bandai S.H Figuarts General Grievous will too (whenever they finally decide to release that one).

Once again I'd like to thank George Gaspar of Double G Toys and YouTube's The Toy Geeks Network for allowing me to review this toy so you folks out there will know if this is an item worth grabbing or one you should stay far, far, away from.