Galaxy Gladiator: Fighter Robot (commonly just referred to as Galaxy Gladiator) is one of those oddball toys that doesn't quite fit exactly into any particular genre, while at the same time having characteristics of some and displaying well with them. I have two genres in mind now; "junior machinders" and the "mecharobo" toys.

Standing at 15" tall, "GG" here is most closely related to the mecharobo toys so I'm lumping it in with those. The reason is that it is made of hard plastic, battery operated and works on the same principle as, and indeed shares parts with, those toys. It consists of 6 basic parts. These include the torso/head/arms, the fists, the legs, the feet and a tank tread. So although certain parts can be removed, it's not fully modular like those toys. Again, close, but not quite the same.

Really, the only thing it does that is like those is when you insert the batteries in the back and turn it on, the legs "walk" back and forth.

The only alteration of note that you can make to the robot is to remove the legs and move the feet up. I don't know why anyone would do this, but you can.

The tank treads can be inserted into either the stomach or the back and it can essentially mimic the Heavy Tank mode of Combattler V.

Speaking of Combattler V, did you notice that the chest mold is from the Combattler V Mecharobo toy by Popy? This toys shares it with that as well as the Banda Red Fighter and bootleg Press Go Robots. All the other parts seem to be original designs.

Outside of the motorized parts, the only other points of articulation are located at the shoulders and neck. Arms go up and down, head turns side to side. You know the drill. But if you are starting to feel a bit ripped off in this loss of play value, then now would be a good time to let you know that, unlike the dumbed down Bandai Red and Blue Fighters, this one has firing fists! Just press the yellow button on the forearm and a strong spring will launch them into action. However, the design of the fists is a little funky looking. Look at how long the thumb is. It wraps around the knuckles and reaches the middle finger!

This toy was released by a company called Eurostil and was made and sold in Italy. It came packaged in a solid one-piece cardboard box with a lid on the top. It features the same design on both sides, with the only slight difference being that the front also includes some legal text in the bottom left corner. Play features are depicted on both sides of the box.

However, I should point out that there is also a box variation for this toy. It has also been seen packaged in a window box. Notice also that this version features a sticker variation. This version is much, much rarer. In fact, I've only ever seen it for sale once. I didn't win it but luckily I saved the picture. 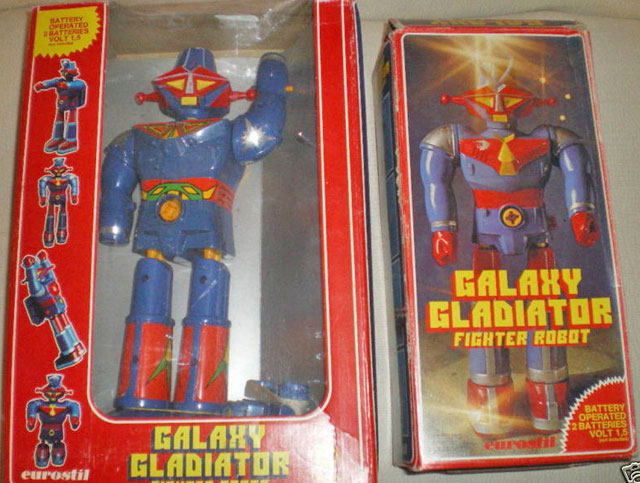