This figure was kindly provided by David White, and will be available to preorder on his Mecha Zone store starting July 30th, 2015 at 9:00 PM.

The NES game Metal Storm, released late in the system's life, is a true cult classic. This tightly designed action platformer puts the player in the role of the Storm Gunner M-308 Custom (or just "M-308 Gunner") pilot, who must infiltrate the Pluto space station "Cyberg" and shut down its LaserGun before it can destroy the Earth. Developed by Tamtex and published by Irem, the game features an innovative "gravity flip" mechanic, where the M-308 Gunner can reverse gravity in order to walk on the ceiling or fall upwards. Video game aficionados speak highly of the game for its gorgeous 8-bit graphics and brutal difficulty. Metal Storm even got a cover with a 12 page guide in volume 22 of Nintendo Power! Many fans have fond memories of that issue, because it featured a custom-built model of the M-308 Gunner being used to promote the game. 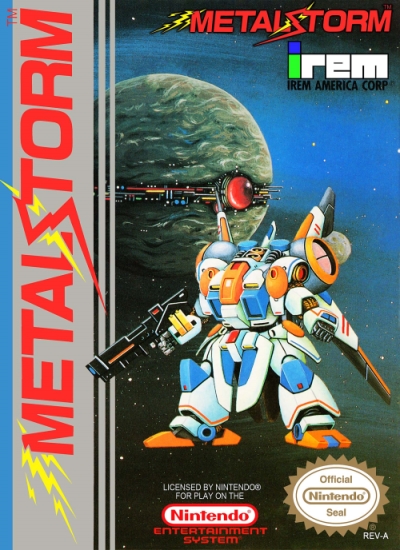 Like a lot of fans, I was initially drawn to Metal Storm by the image of the M-308 Gunner on the box cover and Game Pak label. It's such a cool and unconventional design that one can't help be charmed by the little robotic hero. David White, artist and indie toy maker, decided to take his appreciation for Metal Storm and turn it into a physical product. With the support of game enthusiast Derek Klaren, the "Metal Gunner" has stepped out of video land and into reality.

The Mecha Zone Metal Gunner is a 3D printed toy that is hand-made by David White himself. I've watched him develop his own Takara SF Land inspired figures like his Mechanauts, and I am really impressed by what can be accomplished using relatively inexpensive 3D printers to create fully-functional toys.

Like a lot of indie figures, the Metal Gunner comes packaged in a ziplock baggie with a header card stapled on top. Inside the bag is the Metal Gunner itself, a mini enemy walker, and an armor power-up.

Also included is a very nice art print of the M-308 Gunner as illustrated by David White.

On the back of the print is information about David's website, Mecha Zone.

The Metal Gunner itself stands three inches tall and is made out of 3D printed ABS plastic. As such, it feels very solid and is a sturdy little figure.

Like many of my friends who produce 3D printed toys, David uses an acetone vapor bath to prep the Metal Gunner's parts before assembly. This process ever so slightly melts the plastic in order to smooth over print lines and give the final product an eye-catching gloss finish.

I find that the toy is still nicely detailed, even with the use of this particular finishing process.

The M-308's huge blaster is molded onto its right arm and looks really good!

David also left a subtle artist's mark on the figure with this stylized "MZ" embossed on the left leg.

Now, I want to emphasize the fact that the Metal Gunner is very much a playable toy. Nearly every separately colored part is connected via a sturdy ball-joint, with the waist being a free-moving swivel.

While it lacks movable elbows and knees, the toy is still very fun to pose.

Even at this size, the Metal Gunner looks quite intimidating with its chunky proportions and big ol' gun.

It can even pull off a subtle walking pose thanks to its ball-jointed ankles.

Here is the toy with the similarly sized Assault Kingdom Zeta Gundam and Combiner Wars Powerglide. I think the Metal Gunner looks pretty respectable next to regular mass-production toys.

As per the manual and in-game stats, the M-308 is only 3 meters tall, which makes this toy roughly 1/40 scale. In "real" robot terms, that means it's about a head shorter than a Scopedog! Sadly, I only have my 1/60 scale AT Collection figure to stand with the Metal Gunner, so this is not quite a scale party.

For more 3D printed fun, here is the Metal Gunner next to CDX's own Ben "Prometheum5" Mininberg's Stalking Toad. This kind of homebrew toy making is very much a part of the CollectionDX community. Everyone has their own style and preferences - for instance, Ben's Dorvack-inspired power suit is sold with a full custom paint job. While I would like to see the Metal Gunner with this level of color, doing this is difficult for a one-man operation and also increases the toy's final cost. The Stalking Toad for example, costs twice as much as the Metal Gunner.

Here is the toy alongside my own personal copy of Metal Storm. I've had this game for a very long time and it is one of my favorites.

David's take on the design is based on the box art and promotional model, but alters a few things for the sake of both printability and playability. This version is noticeably blockier than the very organic looking M-308 seen in the in-game sprites and Japanese intro sequence.

The mini enemy walker helps fill out the package, as well as optimize the use of blue plastic for the Metal Gunner's wing pods.

At a little under two inches tall, this fixed-posed figure represents the very first baddie encountered in the game. The sculpt is wonderfully smooth and looks terrific with the shiny finish.

It doesn't do anything except stand in mid-stride, but I appreciate the enemy walker as an old school-style accessory.

And with a little forced perspective, you can have the Metal Gunner face down the enemy walker just like it does in the game!

Lastly, the toy comes with a small plastic chip that is a 3D version of the armor power-up. It is a simple pixelated icon with an "A" on the front. This is arguably the most important item in Metal Storm, as otherwise the M-308 blows up in one hit (hence why the game is so hard), so I appreciate this as a fun nod to the game. I just wish there was some way to make it stand up on its own.

The back of the power-up gives you a look at the 3D printing process, with the mesh lattice clearly visible.

I've known David for many years, and admire his amazing talent as both an artist and toymaker. The Metal Gunner is a really cool example of how being both a mecha fan and a creator can come together to produce a tangible thing for many to enjoy. David gets my most sincere gratitude for giving me this toy to review, as he could see me chomping at the bit to buy one as soon as it came out. I can confidently say that the Metal Gunner is a great piece, and is definitely worth a look for fans of Metal Storm or people into the indie toy scene. It's solid, playable, and just a fun toy in general. Plus, it won't explode after touching spikes like the in-game character...