Rue Morgue has been reporting on the horror genre in film and culture for close to 20 years now and the tail end of 2015 saw them hitting the collectibles scene with a brand new line of bobblehead toys called "Rue Morgue RIPpers. The first entry in the line showcases one of the great stars of horror cinema (and cinema in general), Vincent Price. Although the figure does not bear the name "Aggronautix", the website it is sold from is part of their overall site and since they made many prior bobbleheads in this style, I think it's a good bet that they may have made it on behalf of Rue Morgue. Furthermore, the figure comes to us courtesy of Aggronautix and is available for purchase now at vincentpricefigure.com.

The figure comes packaged in a cardboard box with a clear plastic window. Since it has a small plastic baggie over it and is resting in a styrofoam tray, I feel like this is one instance where the packaging would likely have benefited from just using an image of the product instead. You'd actually have gotten a clearer image of what you'll be receiving that way. Previous "Throbblehead" releases reviewed here did come in solid boxes so perhaps it was done this way to differentiate it from those.

The other sides of the box feature black and white images of Price from various film roles.

This figure is limited to 1500 pieces and each one is numbered. What number you have is indicated on the bottom of the box.

The styrofaom tray that the figure rests in is actually in two pieces. The bottom piece is solid to hold the figure while the top half is cut out to allow it to be seen through the window. Again, I think a sold cardboard box, with solid styrofoam would've been a better option.

Once you remove the figure from it's packing, you'll get a decent likeness of Vincent Price dancing with a skeleton. I only say "decent" because although once you know who it's supposed to be, you can see the resemblance but you could also be forgiven if you thought it was Melvyn Douglas.

Although I don't recall any scene in 1959's "House On Haunted Hill" where Price dances with a skeleton, one does play a vital role in that film and there is a image of him dancing with it on the set, albeit in different clothes. So I suspect that this sculpt was inspired by that. 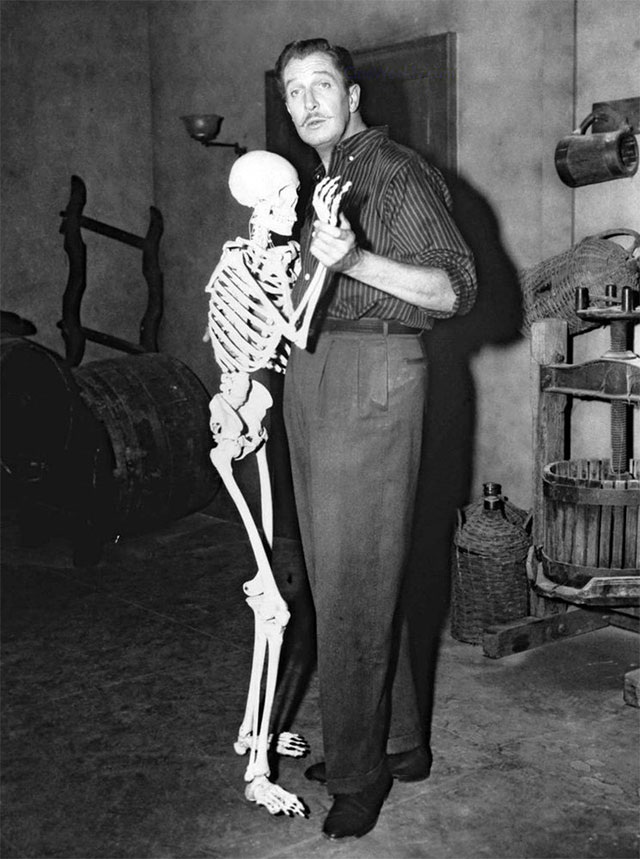 The rest of the sculpt it OK but the paint apps leave a little something to be desired in certain spots. Fortunately most of the spots that don't look great aren't in easily visible places so overall it doesn't bother me too much.

Overall, I think this 7" bobblehead figure is a fun little addition to my horror collection but isn't a must have item either. I suspect it would like nicer with others of it's kind so it'll be interesting to see what the the future holds for the Rue Morgue RIPpers line. In either case, it's affordably priced so if you're a huge Vincent Price fan, you might want to add it to your collection. You can do so at vincentpricefigure.com.